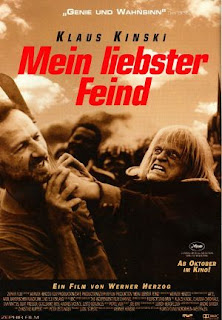 German actor of Polish roots Klaus Kinski had a bad reputation due to his uncontrollable outbursts of rage that would last for almost 48 hours non stop, which is why no director liked to work with him twice. Probably the only person who knew how to control and even tame him was director Werner Herzog who tells how he thinks Kinski actually had a gentle side. He first met Kinski while he was a little kid, back in '55, when his mother rented their apartment for the actor. Apparently, in an act of rage, Kinski locked himself up in the toilet and demolished everything. In '72, Herzog shot his first film with Kinski. The tension on the set was so high, that Herzog apparently threatened to kill them both if Kinski leaves the film. Still, they worked on 5 movies all together. Kinski died in the US in '91.

Interesting documentary "My Best Friend" - the literal translation would be "My Favorite Enemy", an ironic title - is a quiet and subtle dedication to magniloquence and feelings of deceased actor Klaus Kinski: though we rationally condemn his antics, there is at least some part of his character that we subconsciously adore. Since Kinski died in '91, Herzog couldn't work with him anymore, but, tricky as always, he "cheated" on destiny and made one last film about the actor using his stock footage and interviewing people who worked with him. Kinski was a strange person: due to his outbursts of rage, it's not hard to figure out he had some serious personal problems with the people and the world and suffered at least from some kind of manic-depression, yet Herzog also shows he knew to also be a fragile, gentle and quiet person. In the end, it's hard to distinguish if his extroverted personality was just for show to hide his introverted side. Some of the anecdotes Herzog brings up from his 5 films with Kinski are really funny and strange, while many people who knew him told he was always "angry and explosive when he didn't like something". The collection of their scenes shows a love-hate relationship and maybe isn't as strong as the fascination of the sole theme, yet Herzog directs the film, for it's caliber, the most fantastic of all fantasies, unobjectively admitting how he found his soul mate in the strange actor.