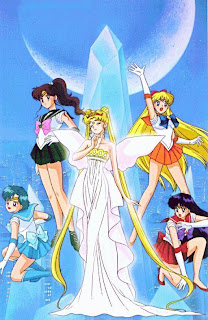 Sailor Moon and the other senshi gain back their memories and now battle against Ail and Anne, two aliens who gained the shape of a guy and a girl who steal the energy of the people for their Doom tree (Makaiju arc). After they are pacified and leave the Earth, the senshi have to fight against The Black Moon clan led by the suspicious Viseman, while they get support by Chibiusa – Usagi’s and Mamoru's daughter from the distant future (Black Moon Arc).

How often in history did politicians invent imaginary enemies and silly disputes with other countries (like let's say the border) in order to antagonize them, to instrumentalize their nation and make them hate another one? And the average people actually often cheer at that injustice. But many other things in history just show how easy it is to corrupt people, which is why the youmas in "Sailor Moon" could be seen as normal people getting 'contaminated' by hate, and the senshi as the healers who cleanse them. It’s not important why nobody can’t recognize the sailor senshi’s identities even though they don’t wear any masks – it’s magic. The whole story is shaped by magic and not by logic, symbolically showing how they are one of the few people aware of the evil around them, while the general public is ignorant towards it. The "Makaiju arc" segment is flawed -mostly because it made the mistake not to make youmas appear inside people like in the first season, but outside them - but some of it's episodes seem as if they came from your favorite movie; truly, the first 2 episodes are throw away material and the finale is nowhere as epic as in the other seasons, but the characters and deliciously written situations throughout are so faithful to Naoko Takeuchi's spirit that the less informed viewers won't even notice this wasn't a part of her original "Sailor Moon" manga, and that's "Makaiju's" biggest compliment. Some slice-of-life moments are fantastic, like when the people are standing in a line and Natsumi suddenly slaps a macho guy telling him that's no way to "treat a lady" (implying to the audience he somehow tried to "touch" her), upon which Mamoru shows up and reacts, bravely looking him directly in the eye which seems to last for an agonizingly long moment of uncertainty - until the macho bully gives up and leaves in defeat, not wanting to try to start trouble. Or the hilarious and unbelievable scene where Natsumi raises up a little baby which suddenly urinates on her face or Makoto's comments about her "biggest talents". Due to fresh and skillful writing, this holds up the test of time easily, and in the end it also gives a sly little commentary about love being better than power.


Unlike the “Makaiju arc” that starts off sluggishly but then gains momentum and actually becomes extraordinary, the “Black Moon arc” starts off in big style but then quickly falls apart and becomes the weakest of all “Sailor Moon” seasons. The main problem here is that it has become shockingly routine – everything, from the stories, the characters up to battles have been stripped of the typical anime ‘magical girl’ magic that made “Sailor Moon” so special in the first place, becoming just a standard and pale superhero story that seems more like ordinary Spiderman or Hulk. Starting from episode 65 onwards, almost nothing happens: events unfold and play out before the screen but they seem insignificant and leave the viewers indifferent. For instance, the four sisters of evil could have been so much more interesting, yet only Koan remains really a fascinating character. Episode 76 went so far with the ridiculous youma ideas that they even capture the sailor senshi by putting them in a giant donut (!) while the long doubts implanted by a youma into Ami in episode 80 are almost intolerable. The sequence where Mamoru breaks up with Usagi and she leaves his apartment, sadly wondering through the city until she enters a phone booth and starts crying, is absolutely beautiful and easily one of the most emotional moments in the history of anime, which is one thing that should be given credit to this arc, but just 5 or 6 great episodes out of 28 in total is really too little to save it. It has several problems that burden it (the reason why Mamoru broke up with Usagi proves to be really weak; the typical time travel plot holes; the lack of a clear motivation to Wiseman's suicidal plans, as opposed to the manga storyline...). Still, despite its half-hearted tone, this season has one of the most bizarre scenes in the whole history of anime, the one where a naked Chibiusa transforms from a little girl into a grown up woman in just 20 seconds, which is one of the most surreal anime moments.