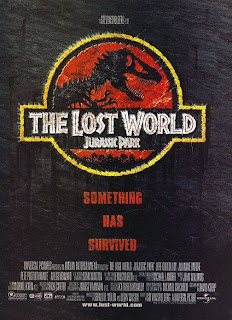 Years after the catastrophe in "Jurassic Park", the dinosaurs seized control of the Pacific island where they were created. Scientist Ian Malcolm would gladly forget the experience, but goes back to rescue his girlfriend Sarah who went there, together with his adopted daughter Kelly. Hunters film and capture the dinosaurs and bring them to the US. One Tyrannosaur escapes in the city and starts wreaking havoc, so they manage to return him back.

By grossing 229 million $, the sequel to the excellent "Jurassic Park", "The Lost World" is the 8th most commercial movie of the 90s, yet it's so routinely directed and plainly crafted that it seems as if it could have been easily directed by M. Bay, and not by Steven Spielberg. The critics didn't praise it because nobody wrote a skillful screenplay in the 4 years that would bring justice to the original '93 film, since everything is just relying on loud special effects that lost that magic when they crammed so much dinosaurs it ended in excess. Why didn't Alan Grant and Ellie return for this film? Why was only Ian Malcolm brought back and transformed into the main character? Why were the kids, Lex and Tim, reduced to appearing in only one throw-away scene? The dialogues are banal: "comical" moments of when the protagonists in trouble are slightly annoying, as well as the lame "heroes get saved in the nick of time" cliches, while the sheer amount of violence aimed at dinosaurs is rather incorrect. The most impressive is the tragic sequence where a Tyrannosaurus mother is lost in the giant city, so she drinks water from a pool and chases after buses, as well as the expressionistic sequence where Peter Stormare's character gets attacked by a dozen of mini-dinosaurs in the forest, whose intensity and eerie tone almost reach the level of "Evil Dead II". Just like in the original, even here the "stars" of the film show up somewhere 40 minutes into the film, but they were reshaped and degraded into typical monsters, with an inflation of both their awe and abundance on film since there are too many of them, whereas they end up stealing almost every interesting moment from the human characters in this exploitative, albeit solid entertainment.