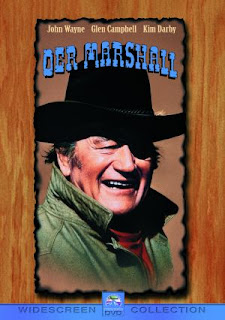 Framer Frank leaves his estate in order to buy ponies in a nearby town, but due to an misunderstanding he gets killed by the drunk friend Tom. Frank's daughter Mattie arrives in town and manages to persuade wild Marshall Rooster Cogburn to chase after Tom for 100 $. But Sherrif La Boeuf from Texas convinces Rooster to rather go with him hunting because the state offers them 1,500 $, so Mattie decides to secretly follow them. In a cottage in the middle of the nature they kill two criminals and discover that Tom joined the gang of notorious Pepper. Pepper kidnaps Mattie, but Rooster kills him and his gang, but La Boeuf also dies. Mattie gets bitten by a snake, so Rooster brings her to a doctor.

John Wayne won an Oscar and a Golden Globe as best actor for western "True Grit" and that's pretty much the only thing this film is remembered for since it's inferior compared to his roles in many of John Ford's films: he won the award because he lost it before. It's a matter of a good film with wonderful landscape shots and a few occasional humorous moments, like when hero Rooster (Wayne with an eyepatch on) spots a rat in his house, aims a gun towards him and warns him that "it's against the law to eat someone else's wheat", but since the rodent doesn't listen to him, he shoots him. Unfortunately, on the other hand, the film has too much banalities, starting from the unconvincing argument around a lost poker game which causes Frank to shoot Tom all of a blue (later on, everyone seems to know that it was him even though he ran away in the dark), through Rooster's charge towards the 4 outlaws who of course can't hit him but he can hit them, up to the finale where Mattie shoots at Tom but the ferocity of the gun catapults her away into a well. The film has certain qualities and a disciplined style, yet Mattie turned out to be the main character, but is very irritating and childish.