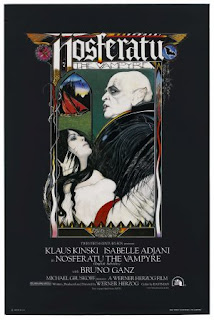 Germany, 19th Century. Jonathan Harker is an estate agent who is deeply in love with his wife Lucy. One day, he gets the assignment to go to Transylvania and make a contract with Count Dracula who wants to buy a house in his neighborhood in Wismar. When Jonathan arrives in the castle, he figures that Dracula is a vampire, but somehow manages to escape. But too late, because Dracula arrives with a ship to Wismar and causes mass death of the inhabitants. Jonathan returns to Lucy but loses his memory. Though she manages to kill Dracula. Still, Jonathan himself becomes a vampire.

The legendary collaboration between two mad artists, actor Klaus Kinski and director Werner Herzog, resulted in an opus of 6 films (including the documentary "My Favorite Enemy"), out which 3 were good and 3 excellent. "Nosferatu" is among those 3 good ones. Even though he clashed viciously with Kinski on their first collaboration in '72, Herzog couldn't resist to put his arm in the cookie jar and after 7 years once again work with him on this film, a remake of Murnau's famous horror classic "Nosferatu": it's an interesting, untypical and opulent horror drama with a static atmosphere, but a one that doesn't even touch the knees of Coppola's brilliant horror "Dracula". Maybe aiming to make a commercial and more accessible film for the wider audience, Herzog in the end obviously wasn't especially inspired which is why his typical wacky calligraphy is reduced (among the good moments that survived is also the scene where Nosferatu's crazy assistant obeys his orders and says: "Let there be your will! Amen!") whereas the minimalistic approach towards the story is exaggerated without any measure for such a film. Still, "Nosferatu" contains one brilliantly absurd moment that plays out towards the end: after the plague that wiped out half of the city's population, Van Hellsing kills Dracula, so the mayor orders his servant, an androgynous woman dressed in an undertaker, to arrest him. But she replies him with: "How? The police is dead!"