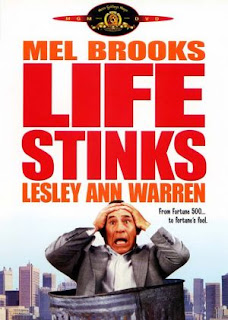 Multimillionaire Godard Bolt wants to build his "Bolt Center" on the area of a slum in Los Angeles. One half of the slum already belongs to him, but the other to his arch rival Vance. Bolt makes a bet with Vance: if he succeeds to live through one month on the street without any money, he will get the whole area. But once on the street, Bolt tastes the bitter life of poverty, anxiety and meets bums Molly and Sailor. He gets through one month, but Vance wants to cheat and pretend he was never rich in the first place. Still, Bolt wins and marries Molly.

Social comedy "Life Stinks" has a well meaning message about life and poverty, but it just signaled another step backwards in Mel Brooks' decaying career that ended in the 90s, and not a moment too soon since his jokes became so worn out and pale in his last few films that they couldn't even pass as real comedy. The mix between tragedy and comedy worked with some comedians, like Chaplin, but here the strange style didn't either bring out the maximum from the emotions nor from the jokes, but just from the actors. They are the only ones who manage to insert some energy into this weak film, whose solid basis was also somewhat secured by the ambitious (but uneven) screenplay. Still, the story contains occasional moments of poetic touch and something rarely seen in a Brooks film - charm. He lost the measure and went overboard in the dramatic scene where Bolt is lying in a coma and Molly tells him that "life is hard, but that it also has beautiful moments", which makes him wake up, while his jokes are sparse (the cremated remains of Sailor are thrown in the water coming from a sewer). Actually, the whole film is simply too sparse to go anywhere.