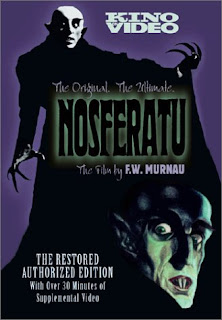 Germany, 19th Century. Real estate salesman Hutter is informed of a client who wants to buy a house near his own. But the client is a mysterious count Orlok who lives in Transylvania, so Hutter leaves northern Germany and goes on a trip to negotiate a contract with him. In a nearby village, Hutter notices a werewolf, while the carriage driver throws him out because everyone is afraid to come near Orlok's castle. Suddenly, a demon carriage appears from fog and brings Hutter to the castle. When Hutter cuts himself on a finger, Orlok licks his blood, thus he realizes his client is a vampire. He runs away down the river, while Orlok boards a ship in order to move in into his new home in Germany, and by the way kills every crew member. Still, the vampire dies when he enters the room of Ellen, Hutter's wife, while Sun rays hit and dissolve him.

Influential German director F. W. Murnau could not get the rights to adapt Bram Stoker's novel "Dracula" so he simply "stole" the story and went on to film his silent fantasy "Nosferatu" in 1922 that quickly went on to become a classic. The new, restored version has a terrible new techno music that was added in the '90s (and which is best to simply turn off) and "colored" scenes that ruined a part of the film's eerie charm, but commonly speaking the film itself is a little bit overrated. Murnau is a genius while he is in avant-garde mood and enriches the film through an inventive use of cinematic techniques (the fast motion (!) scene of the arrival of the demonic carriage emerging out of the fog; the shadow of Nosferatu's hand that "touches" Hutter's body; a glance of a water polyp seen through a microscope...) but less impressive and at times standard while he is handling normal drama, whereas his visual style is mostly minimalistic, despite all the above mentioned tricks. Also, the plot is great in the first half, but somewhere around the second one it becomes heavily overstretched and the ending is mild. Still, "Nosferatu" is a dark film that deserves to be seen twice because it possesses a fine, subtle iconography of fear, representative for the silent era, and Max Schreck is an excellent choice for playing the bizarre vampire Orlok who never blinks during the course of the film and adds another layer to the cold story.