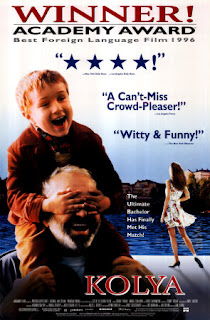 In Prague there lives a cheerful, but at the same time mildly misanthropic musician named Louka. He never married and since his job as a musician isn't payed well, neither on concerts or weddings, he has to work a lot. Since his debts are big and he plans to renew the house of his mother, he decides to do a radical move. Namely, young Russian women are willing to pay 30.000 Krunas to a Czech man for a false wedding just to get a Czech citizenship. So Louka marries one of those women, but she runs away and leaves him her 5-year old son Kolya. Since the boy doesn't speak Czech, Louka at first regards him as a burden, but with time they become inseparable friends. After some time, the mother returns and brings Kolya away, thanking Louka for taking care of him.

Towards some mainstream films one should always be skeptical, but towards Czech films rarely. Director/ screenwriter Jan Sverak astonishingly lightly transforms the simple story into a big undertaking in his film "Kolya", and masterfully portrays the characters using small jokes as a pretext. For example, in one scene the main hero Louka proposes to paint the letters on the grave of Otto, the deceased husband of an old lady, with golden color: every letter will cost 5 Krunas. The greedy crone is shocked and visibly annoyed, upon which he replies to her with: "Too bad your husband doesn't have an even shorter name, you would have gotten it even cheaper". In another scene, an undertaker takes a tick from a dog and burns it in an ashtray. But the main plot, revolving around the relationship between Louka and the little boy Kolya is the main attraction: even though many filmmakers use little children to cheaply gain sympathies from the audiences, this time the film is truly naturally charming, funny, touching and even a little bit magical. The best moment that shows the transformation of the slightly misanthropic Louka into a heartwarming person is the one at the movie theatre: he wants to buy a ticket so that little Kolya can watch animated films on the programme, but the salesperson tells him that the show is canceled because nobody bought any tickets, and the minimum norm to start the show is five people. But Louka has a great idea and himself simply buys five tickets, thus enabling Kolya to see the show after all. Such an "uncompromisingly" charming and fresh film will disappoint only few people.