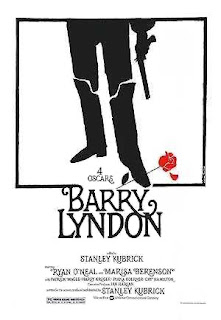 Ireland, 18th Century. After his father dies in a duel, Redmond falls in love with his niece Nora, but she loves Quinn. In a duel, Redmond shoots Quinn, runs away in Dublin and gets robbed. He enlists into the English army from which he escapes in order to have an affair with a German woman, a widowed mother, and then enters the Prussian army. There he saves a general and gets the assignment to spy the Irish man Chevalier, who ironically becomes his best friend in Sachsen. The two of them run away to England where they cheat at playing cards. Redmond marries the rich Countess Lyndon and starts hating her son. After his biological son dies from a fall of a horse, Redmond enters a duel with the Countess' son, looses a leg and leaves England as a poor man.

Winner of 4 Oscars (best art direction, cinematography, costume design, musical score), 2 BAFTAs (best director, cinematography) and nominated for 2 Golden Globes (best picture, director), historical drama "Barry Lyndon" depicting the circumstances of people in the Baroque period, is a slightly overrated and dated film. It's definitely a very intimate, surprisingly emotional piece from Stanley Kubrick about a tragic hero that acts like a toy of fate, with enough impressive scenes, like when Nora puts her appendage in her cleavage and then demands from Barry to "search her" or when the main hero is overhearing a conversation between two gay men in a lake before he steals their horses, but the author half-heartedly directed the 3-hour story, without the quirky visual style from his previous films, even though his composition of frames are easily recognizable, from the centered objects to the neat architectural symmetry. Not only that, but Barry Lyndon is a rather mild, one dimensional figure from which we don't discover his thoughts or feelings, and the actor Ryan O'Neal is a mediocre choice to play him. In one scene, Barry is hired to spy at the Irishman Chevalier who said something in Irish, and then the narrator says: "Barry was so touched by his native language that many won't understand his following reaction"; then Barry starts crying and confesses everything to him, and the two of them become friends. As a servant, he secretly observes the cards of his rivals in a card game and gives him signals (by cleaning the table, for instance), thus it's sad that the charming Chevalier too soon and inexplicably disappears half way into the film. Actually, many characters just appear and disappear in the story, which in the end seems like it's directed in ellipses. "Barry Lyndon" is a very interesting film, but not that intriguing as some say it is. One really has to wonder what Kubrick would have made out of Napoleon, his dream project that was scrapped and then replaced for this film.