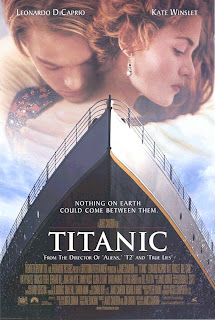 In the present, a team of explorers investigate the wreck of the famous ship Titanic in the Atlantic Ocean. They discover a drawing, and the woman on it is still alive, Rose Dawson, now 100 years old. She tells them her tale: back then, she boards the Titanic with her rich and arrogant fiance Cal. But at the ship she meets the poor, cheerful painter Jack who won the ship ticket in a bet. The two of them fall in love, but just then the Titanic hits and iceberg and starts slowly sinking. Cal framed Jack and accused him of robbery, handcuffing him in a cabin in order to drown, but Rose is able to save him. Since the ship is sinking and there are not enough life boats, people start panicking. Jack freezes to death in the Ocean while Rose is barely saved by a boat a few hours after the disaster.

During the course of the time, some people have started openly questioning the reputation of James Cameron's hydrophobic epic romance "Titanic", calling it a "soap opera on a ship" with a lousy script. Despite the fact that "Titanic" won 11 Oscars and 4 Golden Globes, including for best picture and director, there were at least 10 better films released that same year. The BAFTAs even awarded "The Full Monty" as the best film of 1997. At some moments, the story is indeed a little bit too kitschy and artificial - for instance in the scene where Jack is practicing spitting; the whole moment where Jack and Rose run away in the engine room and hide to make love in a car; Rose's fiance Cal is a typical, one-dimensional bad guy whereas the special effects are average. Still, after a non-stop display of action films, Cameron for once showed his gentler, emotional side and one can notice he put his soul into the film. And sadly, some people are still afraid of their emotions. The first part of the film, the calm one, is sometimes shaky, but once the second one starts, where the Titanic starts sinking, it really becomes powerful and engaging, filled with great little details: the rats are running away from the water in a cabin, a group of musicians is brought on deck to play cheerful music to "calm" down people before the evacuation and once the panic starts the sailors have to shoot at the passengers to bring some order in the filling of the life boats. The sole tipping of the ship offered an interesting perspective and insight (including passangers falling down due to it), while the dramatic moments about life and death are bittersweet and poignant. It's a spectacular film that only gets pushed down because of some weak attempts at humor, but the emotions are really there. Celine Dion's famous closing song "My Heart Will Go On" is a perfect conclusion that nicely suits and elevates the film. "Titanic" is a flawed, somewhat uneven, but still very good film that doesn't sink.