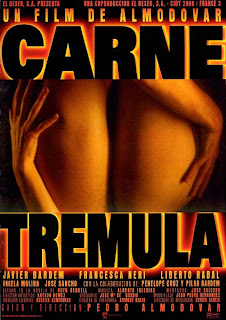 Madrid, 70s. Isabel, a young and pregnant prostitute, is rushing to a hospital, but gives birth in a bus and names the baby Victor Plaza. 20 years later, Victor meets Elena in a disco and the two of them become intimate in a bathroom. She doesn't call back, so he circles with a bus around her apartment. When he enters into her apartment just as she was expecting a dealer, a string of unfortunate events occur: Elena drops a gun and draws the attention of police officers David and Sancho. In a fight for the gun, Victor accidentally shoots David who ends up paralyzed to a wheelchair. After 6 years of prison, Victor gets out and finds out Elena married David. Victor sleeps with Clara, Sancho's wife, and later on with Elena. Then Sancho and Clara shoot each other. Elena stays with Victor and gets pregnant.

Very good drama "Live Flesh", loosely based on Ruth Rendell's novel with the same title, again revitalised the career of Spanish director Pedro Almodovar after his unsuccessful last two films that were seen as misfires by some critics. Considering he is a "self made director", since he never attended a film school, Almodovar is surprisingly talented and keeps the story interesting with many quirky interventions, like the humorous moments where the hero Victor gets born in a bus and ends up getting a life long bus pass or when there's a quick shot of a door with a brush instead of a knob. Almodovar also mixes crime, drama and erotic elements with stylish influences of Buñuel, Fellini and Wilder, but at the same time he is never pretentious or snobbish - instead, his movies are always elegant, light and amusing. "Live Flesh" is skillful and elaborated enough, even though it has flaws and isn't always orderly made: the moment where Victor is fighting for a gun with cops even though he is completely innocent, is a rather amateurish plot device to put him in another fate driven tragedy. That's why changes of characters through different time dates seem much better handled, Penelope Cruz has a neat appearance in the exposition as the prostitute that gives birth to the hero and Javier Bardem and Liberto Rabal are great, which caused the film to become a success at the box office and get a BAFTA nomination in the category of best foreign language film.