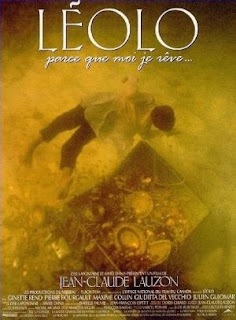 Montreal. Leo (12) lives alone in a narrow apartment with his weird family. He wrote a biography before he fell into a catatonic state and an old man reads it: Leo despised his father and grandfather who tried to drown him. Both his sisters are mentally retarded while his brother Fernard became a bodybuilder ever since he was beaten up by a bully. Leo tried to kill his grandfather but became sick from the world and fell into a catatonic state, rather unnoticed by everyone.

The second and last film by director Jean-Claude Lauzon (who died in a plane crash in '97) was this cruel anti-family grotesque that provokes in a rather unsophisticated way. "Leolo" undertakes a balancing act between genius and madness, but too often leans towards the latter, even though critics praised it and it was among others nominated for the Golden Palm in Cannes. But, should someone be considered a genius if he wrote and directed a scene where some boy rapes a cat? Or where the overweight mother sits on the toilet in front of the little Leolo and thus teaches him how to defecate properly? Whether it's autobiographical or not, not everything in life should be considered worthy of getting transporting into a movie, and even though the author wanted with paradigms of cruelty and tenderness to create a syntax of poetry, he fell into vile territory. Among his more plausible bizarrities is the scene where Leolo imagines how his mother became pregnant: by falling on a tomato that carried sperm on it, since an Italian farmer masturbated on the fruit. Considering the ill-conceived atmosphere and music, the best part of this unusual film is the poetic ending where, it seems, Leolo's mind simply "gave up" on the entire world.