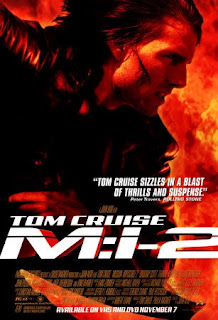 After suspenseful adventures, agent Ethan Hunt relaxes by climbing on a mountain, but then gets a new assignment. He has to stop a villain who got a newly created virus and it's antidote to become rich. His ex-lover Nyah is thus sent to him to spy on his activities, but Hunt also cherishes sympathies for her. When Nyah is exposed, she takes the last shot of the virus to protect Hunt who now has a lot of obligations to bring her the antidote. And kills the villain.

So much money for so little value. The rough and worse sequel to dynamic events from "Mission: Impossible" became the hit of the year, but also brought a lot of problems in creative differences between director John Woo and Tom Cruise who was somehow never really satisfied with scenes captured on celluloid. Firstly, the talented Woo disappointed by putting surprisingly little action sequences, most of which start off at the end of the film. Although unrealistic, they have their moments, disregarding the numb aesthetic mumbo jumbo. In Woo's hands, Hunt was reduced just to a secret agent who stumbled into "Outbreak" and fights against a new virus, which leaves the story with a lot of mannerisms and little love scenes with the beautiful Nyah. De Palma still had more humanity and sense in the original than Woo who slowly, but surely looses colors from the flat story. Not even the happy end nor the spot-like editing don't compensate for this blown out, pretentious product. It's hard to believe it, but even "MI2" is a John Woo film.