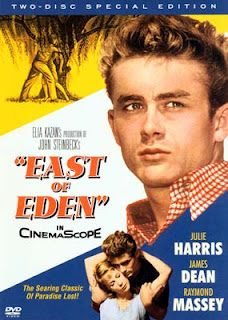 USA, World War I. The young Cal was always jealous at his brother Aron who is preferred by their father Adam, who raised them by strict Christian rules. At the same time, he told them their mother Kate died. But Cal discovers that their mother is still alive and owner of a successful brothel. After Adam goes bankrupt from an unsuccessful business, Cal decides to earn enough money for him by investing in beans. He wants to give him the money, but Adam refuses his present. Out of revenge, he shows Aron their mother, making him go crazy, while Adam gets a stroke.

Director Elia Kazan stayed less important than the brilliant movies he made, like "A Streetcar Named Desire" or "Splendor in the Grass", but the reason for that lies in the negative reputation that followed him for his snitching Communist sympathisers in show business. Fierce melodrama "East of Eden", winner of a Golden Globe as best motion picture - drama and one Oscar for best supporting actress Jo Van Fleet, is a razor sharp cult film not only because of James Dean, but also due to the provocative story that's a variation of the Biblical theme of the conflict between Kain and Abel. Even though there occasional naive and over-the-top touches here and there, many sequences, like the one where Cal meets his mother for the first time, a brothel owner, upon which she feels shocked, easily enter the list of classic with a subversive view on religion and erotic, but presented in a subtle way.