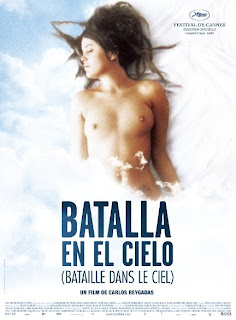 An overweight man, Marcos, stands naked while a woman, Ana, is performing fellatio to him. The army performs a patriotic ceremony. Marcos stands with his obese wife Bertha in a subway hall, where she sells things, and mentions how the baby they kidnapped died. Tormented, he goes driving through the road, ending up in bed with prostitute Ana, the daughter of his boss. He mentions the crime to her and tells her not to tell anyone. Plagued by his guilt, he decides to turn himself in, even though Bertha is against it. He meets Ana with another man and stabs her, then walks on his knees, like a pilgrimage, to Guadalupe, where he dies.

The second film by director Carols Reygadas is a meditative, almost magical piece of movie poetry that finds beauty in the ugly. But already in the opening shot does the author hint that one must have an open mind in order to enjoy it: it shows the face of an slightly overweight man, Marcos, then the camera goes down revealing he is naked, then even further, revealing a woman, Ana, is performing fellatio to him. At first, it may seem vulgar, but somehow, when the camera slowly comes closer and zooms in on Ana's face while doing it, eventually coming face to face with her, composing her closed eyes over the entire screen, while that enchanting music is playing in the background, it seems as if there is something magical in that primal act, as if it makes us understand it, trying to show how even that's part of life.

There is no plot in the everyday drama revolving around the sluggish hero, since it just consists out of vignettes in which Marcos is walking through the town, and even the kidnapping of the baby is never shown, just mentioned occasionally in a few words, yet the images are so hypnotic they will take you on a whole plot of its own. The movie earned quite a few negative remarks due to the sequence where the overweight Marcos has intercourse with the even more obese wife Bertha, but during the whole time, Reygadas never plunges into the grotesque territory, but always seems sincere and keeps his characters touching, imperfect like real humans. Even though this is technically a crime film with an erotic touch, during the whole time it slowly builds a method of its own, transforming into a quiet, contemplative essay about life. Nobody knows why Marcos suddenly climbs up a hill in one scene while the camera pans across the sky and shows a cross, but there is something dreamy in the way it is done. Even though the ending is pointless, the whole film is like a subconscious dream with virtuoso direction, but it seems people should watch it alone and judge it without interference by the wider audience.