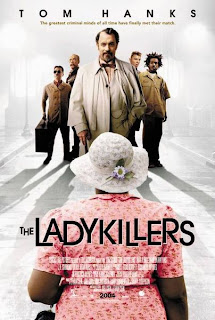 The 67-year old Mrs. Marva Munson is a quiet, religious widow who complains to the police about the too loud Hip-Hop music. She rents her house to the seemingly intelligent Professor Dorr and his four companions Garth, the General, Gawain and Lump who pretend to be musicians, but actually dig a tunnel in the basement and secretly steal millions of $ from a local casino. When Marva discovers them and threatens to contact the police if they don't give the money back, they decide to kill her - but by a series of bad luck and greed, they just kill each other. In the end, the police doesn't even believe Marva about the money.

One can only feel sadness and denial in the fact that the talented Coen brothers missed an opportunity and crafted a weak film, the uninspiring comedy "Ladykillers", a remake that gets even paler when compared to the original '55 comedy. Only a few sharp details here and there reveal the Coens trademark calligraphy, yet the majority of the story is surprisingly mainstream and crummy, thanks to Marlon Wayans' annoying appearance even closer to "Norbit" than an elevated comedy, while Hanks, Ma and Hurst are simply no match compared to Guinness, Lom and Sellers. Only Irma P. Hall managed to deliver a fine performance. The dialogs are strained, both in written and spoken order, the small crumbs of bizarreness seem without a point except to pretend to be sharp, the "new" scenes compared to the original seem all wrong while the story is incredibly unfunny since the first funny gag appears only some 40 minutes into film, in the sequence where the sheriff drops by at Marva's house and thinks she is nuts because she tells him she had diner with the Professor Dorr who is nowhere to be found since he is hiding in his room under the bed, in fear from the authorities. Still, one has to hand it to the Coens: even their weak films seem more pleasant than weak films of other directors.