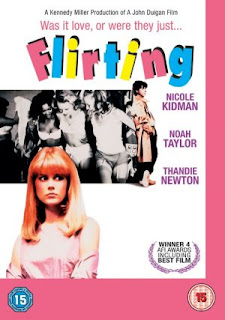 Australia, '65. Danny Embelton is attending a harsh boarding school for boys in which the strict teachers often even physically punish the students. Also, school bullies often pick on him, thus his only friend is Gilbert. On the other side of the lake, there is an school for girls that just got a new student - a Black girl from Uganda, Thandiwe, who quickly falls in love with Danny. The young couple is looked at with discredit by the popular girl Nicola who has a relationship with the football player. After unrests in her homeland, Thandiwe decides to return to Uganda, but tricks the school - by leaving a day earlier in order to meet secretly with Danny in a hotel. The teachers find that out and expel Danny from the school.

Humorous romantic drama with the memorable title "Flirting" is today remembered mostly due to the fact that the young Nicole Kidman played one of the supporting roles in it and that Anderson said that it was part of inspiration for making his film "Rushmore". It's a pity that it's a forgotten film since it's a quality made coming of age drama, with uneven, forced and ungainly style however, but also with a fine nostalgic thread. The best parts are the one which include surreal scenes (when the hero Danny imagines his strict teacher in a Nazi uniform or when he talks with Sartre), while the romantic side is very sustained and lifeless, though the finale in which Thandiwe deceives her school under the pretext that she is going back to Uganda - but actually leaves a day earlier in order to spend her time with Danny in a motel and loose her virginity - is fabulous and almost managed to capture the magic of first love. With a little more of such details, this could have easily been a great film, yet the messy structure of the story and the unnecessary narration bring it down a notch.