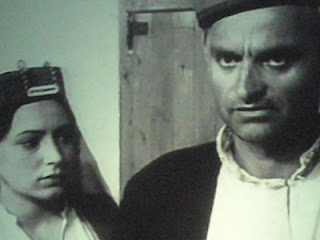 Dinara area, Yugoslavia, '48, during the Tito-Stalin split. Two Udba agents wait for their snitch on a bycicle and then arrest a man. Some time later, a wedding banquet is walking through the road, celebrating the marriage of Ante and Višnja, but is surprised when the two agents join them in celebration. Andrija, a mighty local man who is there to protect Ante, accidentally falls and injures himself, but when gaining consciousness, he rapes Višnja in her home. Minutes later, the two agents arrest him—for having sympathies with Stalin. But the rumor about the rape spreads and the people beat up Ante and kill Višnja.

"Handcuffs" caused a solid scandal during its premiere in 1969 due to its gruelling, explicit 3-minute sequence of rape, but the more subversive viewers where even more amazed that author Krsto Papic actually used that rape as an allegory and crafted a sly political message about the corruption of power—in this case, of the mighty local man, Andrija (Soviet Union), who was suppose to protect the bride Višnja (Communist satellite states), but actually took advantage of her. Since Andrija is later arrested for supporting the Stalin movement in Yugoslavia, the message is obvious—the autocratic people tend to act whatever way they want, doing whatever they feel like, without any rule of law or tolerance for the people of different opinion—and their bruteness leads to a tragic consequences. This is not a pleasant film. It is very disturbing and tragic towards the end, yet it seems as if Papic wanted to add some humor into the story that is set during a wedding celebration, resulting in some almost unintentionally comical moments: the old toothless grandpa; a man who looks for the thief who stole a shoe on his foot; a little kid who shows up out of nowhere and asks the Udba agent whom he plans to arrest next; a group of men continuing to dance the traditional dance for hours even after one of them starts bleeding on his back, causing the old man to say: "There is no real dancer without bleeding!" Adding to the humorous touch is also the bizarre mix between naturalism, exaggeration and documentary feel, emphasized by bizarre characters and their lunatic stares and facial expressions, yet as a whole, all the strings were pulled the right way, crafting a very expressionistic film, while Fabijan Sovagovic is great as the tragic hero.