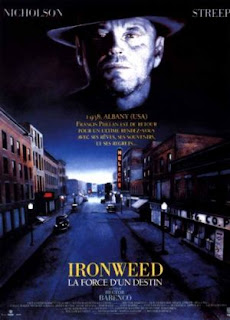 Albany, New York, 1 9 3 0s. Middle aged Francis lives as a homeless bum, trying to forget his dark secret from the past - 22 years ago, while he was drunk, he accidentally dropped his baby and it died. Together with his cancer-suffering pal Rudy, he goes to earn some money by working in a graveyard. They unite with the drunk Helen, a washed up singer, in a shelter and wonder the streets. Helen and Francis are cold and thus go to an apartment by his pal Jack, yet get thrown out quickly. Francis leaves her and works a day by collecting rag. He buys a turkey and visits his wife Annie, managing to soften up the heart of his now grown up daughter Margaret. He leaves once again and witnesses Rudy's death during a raid. He also finds Helen dead in an apartment. He leaves in a train.

One of the least known and least mentioned Jack Nicholson films offers one of his most astonishing performances, far from his self righteous ego trips that started to mount after fame came to his head in the 80s. In "Ironweed", an adaptation of William Kennedy's novel with the same title, he plays - a homeless bum, Francis, a man who became an outsider by choice in order to forget his dark secret from the past, thus offering a rare example of films that cower the theme of homeless people. It's art to craft such a heavy theme with a light hand, but director Hector Babenco manages the task with ease, giving the episodic story, assembled from small vignettes, a point - a bunch of youngsters dressed up as ghosts for Halloween steal Helen's purse on the street; Francis has hallucinations of ghosts of the three people he accidentally killed; Helen has to give a dirty homeless man a hand job in his car and thus later on washes her hand when going to church - giving a clear social context, remaining measure even in excessive scenes. Not much is going on and thus the movie is slightly monotone, yet it's depressive tone and fine nuances are well developed - the scene where Francis shows up in his family house for the first time in 22 years and reads a letter his then 9-year old daughter Margaret wrote him, softening her up to tears, is one of the most emotional situations of the 80s.