The Candidate for Goddess 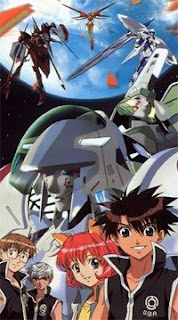 The year is 4048. Man kind has moved to space whereas their new home, planet Zion, is under attack from evil aliens. To fight them, man has created 'Goddess', giant robots that can only be controlled by teenagers. The new candidates are trained in a space station, and among them is the young boy called Zero. He often fights with Hield, while his friend is the calm Clay. Zero accidentally falls into a robot and discovers her made a connection with it, but also gained hallucinations about some woman. The female part of the candidates has, among others, Kizuna, a girl with the ears of a cat who becomes Zero's partner. Quickly, the candidates test the simulation flights, and then even real fights.

"The Candidate for Goddess" is the type of the then very popular genre in anime, mecha, the so called "people in giant robots", but doesn't grasp the Parthenon of quality of such classics like "Shin Seiki Evangelion". It's a matter of a solid anime series that suffers from heavy banality and silly ideas: the opening credits of every episode show scenes of a space station through which the main hero is running, a boy with a funny name, Zero (!), in a ridiculous white robe that has an opening for his shoulders, while his new partner, Kizuna, a girl with cat ears on her head, awaits him - enough said about the credibility of the imagination of the authors. To make the anime even more absurd, the story is a patchwork assembled out of numerous mecha series seen before, revolving around kids who are trained to defend their planet called Zion (!), thus borrowing in a clumsy way a little from the Bible. Unfortunately, the robots are conjured up using inert CGI, thus ending completely ephemera, whereas despite a few neat misadventures of Zero and his friends, the story doesn't seem to fit in. Despite all of it's flaws and eclectic touch, the best scene is the one where Zero falls in into the liquid of the robot and experiences a hallucination of a naked woman with 100 foot long hair. Among the inconveniences is also the fact that the show was canceled after 13 episodes, thus making the anime stop in the middle of the story.