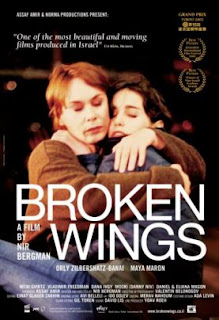 Haifa. The young and rebellious Maya is angry that she can't perform her song with her band on stage because she has to babysit her little sister Bahr and brother Ido, since her mother Dafna is once again called to work in the night shift in a hospital. Ever since their father died, the family has been falling apart. Maya's brother Yair works at night by giving leaflets in a mouse costume and hasn't been to school for months. When Dafna forgets to pick up Bahr from the kindergarten, Ido jumps in and persuades her to film him jumping in an empty pool. The jump goes wrong and he lands in a coma. Maya has a heated argument with Dafna, telling she wanted her to die instead of her dad, and thus leaves from home. Ido wakes up from coma while Dafna picks up Maya and makes up with her.

Small and humble family drama "Broken Wings" is a very smooth, simple, unpretentious and deeply touching film exploring the theme of the death of a father in a large family. Director Nir Bergman cleverly handles the subject by never showing the father's sole death, but just the consequence of it, neatly summing up little messages and nuances around it, adding a refreshing dose of humor - for instance, in one scene, student girl Iris exits the room of the school counselor and makes hilarious angry hand gestures at her door, and later on Yair enters the room and the counselor plays catching volleyballs with him, telling him to say whatever falls on his mind as soon as he catches the ball in his hand - while the main actress Maya Maron is the absolute star of the film, convincingly playing the young and cynical heroine Maya who is rebellious against everyone. The first third of the film is excellent, but later on it is handled as a straight forward drama, loosing a lot of it's unique touch and becoming rather ordinary, relaying too much on routine melodrama repertoire, even though it never becomes a soap opera.