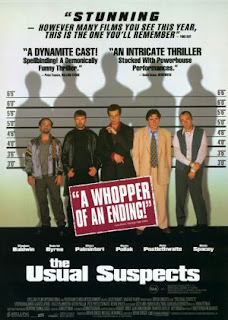 A ship explodes in the harbor San Pedro. 27 people are found dead and only two alive: a wounded Hungarian mobster and Verbal Klint, who suffers from cerebral palsy. In a police station, Verbal is questioned by agent Kujan and tells him what happened: 6 weeks ago, he and four other crooks - Keaton, an ex-cop, Fenster, McManus and Hockney - were brought for a routine police lineup. They became partners and committed a risky, but profitable coup where they robbed corrupt police officers who escort drug smugglers. Just when they were on vacation, they were contacted and forced by the mysterious crime boss Keyser Sooze to rob a ship involved in a 91 million $ cocaine transfer, but they didn't find any cocaine and were killed - Sooze just used them to kill a witness on that ship. Verbal is released, but then Kujan figures he was actually Sooze.

Rather overhyped and overrated, but still very gripping crime film "The Usual Suspects" suffers from a weak 20-minute start that doesn't seem special, but thanks to the slowly burning fuse of intrigue it manages to lift itself up quickly and please in a very interesting mystery-crime texture. Despite its top notch tangle and legendary plot twist at the end, the film is still just a very straight-forward crime film that just depends on its essence rather then the multi-layered story, that owes a lot to films by Tarantino and Fuller even though it seems very original on its own. Since it is a cheaply produced independent film one can forgive its occasionally modest looking scenes, the screenplay is mathematically precise, while the direction by Bryan Singer completes it in a solid way. The scary stories about the mysterious, unknown gangster boss Keyser Sooze in the film that seem almost to be exaggerated - in one of them, a couple of Hungarian mobsters stormed into his house and took his wife and kids as hostages in order to force him to give them a share of his territory, but he proved to be so tough he himself shot his family first and the mobsters second - all add to the mystical touch of his reputation, while the whole film is told from the perspective of the main character, Verbal, making the viewer wonder if all the stories there are just a lie, reminding a little bit of "Rashomon". The movie won several awards for excellent supporting actor Kevin Spacey - who pulls all the strings in the story.