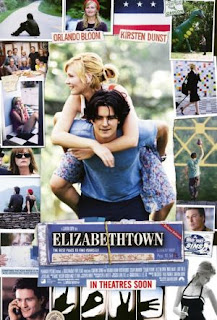 The young Drew Baylor is shocked when his new design for a shoe ends in a fiasco, resulting in his company losing 972 million $. Devastated, just as he decides to commit suicide, his sister calls him and tells him his father died and he has to go to Elizabethtown, Kentucky, to arrange the funeral. In an airplane, he meets the charming flight attendant Claire. Arriving in Elizabethtown, he is annoyed by relatives and has to cremate his father's body. But he meets Claire again and starts a relationship with her. They separate but meet each other in Oklahoma city.

Cameron Crowe never made movies about gimmicks or special effects, but always about people. Whenever critics mention the best directors and writers of the 90s and '00s, they never mention Crowe, but he always confidently and steadily built his small empire of impressive films about humanity. "Elizabethtown" is a small disappointment because he failed to craft it the way it should be: the narration is unnecessary, the writing sloppy, the babble too inert, many scenes pointless and undeveloped while the characters of relatives the main protagonist Drew visits are all annoying. It seems as if Crowe's special trademarks have all became extinct in "Elizabethtown", except one that somehow miraculously survived - the absolutely beautiful character of Claire (played by Kirsten Dunst). Crowe always had a sixth sense for writing magical female characters and so Claire is the only ingredient that saves the film from mediocrity. She is so charming, so irresistibly cute and so alive she steals every scene she is in, overshadowing the pale main story revolving around the funeral. One of the best scenes is when she is a flight attendant and sits next to Drew in the airplane in the middle of the night, initiating small talk and giving him advice about travel directions, or when she talks with him over the phone in the bath and tells him she has to be "awake and charming" in a couple of hours for a flight to Hawai. But the most romantic moment is when she goes to an empty auditorium and says to Drew, with a smile, via the microphone on the loudspeakers: "I like you".