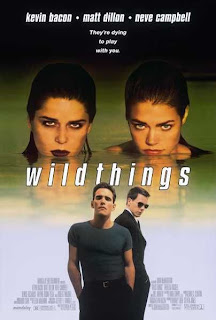 Florida. Police Sergent Ray Duquette has an important motto: "People aren't always what they appear to be". In his small town really strange things start to occur: students Suzie Toller and Kelly Van Ryan try to seduce Sam Lombardo, a high school guidance counselor who already slept with half of women in town, but when he rejects them, they accuse him of rape. Luckily, Sam hires lawyer Bowden who saves him on trial and even demolishes Suzie's accusations, who admits she and Kelly lied about the rape. Sam gets a 8 million $ settlement from the Van Ryan's - and it turns out he, Kelly and Suzy all worked together to get the money. Sam murders Suzie while Ray shoots Kelly. It turns out Sam and Ray have been secretly working all along too. But Suzy just fabricated her death and kills them, getting all the money.

In a time where "The Sixth Sense", "Se7en", "Fight Club", "Memento" and a whole bunch of films had twist endings, "Wild Things" takes the cake for having so much plot twists it overshadows all those films put together. Without exaggeration, the cynical screenplay by Stephen Peters has at least five plot twists - most of which happen even after the closing credits! -turning into a film where every following 20 minutes represent the negation of the previous ones, thus every character turns out evil and two faced: it's as if he makes us ask: "Can people really pretend to be absolutely innocent and then turn out absolutely evil?", and the film answers it with: "Yes". Even though the story may seem slightly inconsistent, at close examination it's actually surprisingly plausible - one only has to have in mind one little, overlooked detail at the end, that features an amazing quote: "She has an IQ around 200. She can do whatever she puts her mind to" - and is actually very consistent plot crafting. But, alas, the development of the characters and depth don't follow the surprises of the twists, exhausting themselves only as one dimensional gimmicks with heavy construction. The whole film is just one well made mainstream achievement, which is obvious in the attractive, but completely unnecessary erotic sequences. Still, if one doesn't seek something more, "Wild Things" are a terrifyingly dark thriller with a funny Bill Murray as the lawyer with a Shanz collar and Denise Richards as seductive Kelly, while the direction by John McNaughton is competent, crafting a sleazy charm not even Hitchcock would be ashamed off.