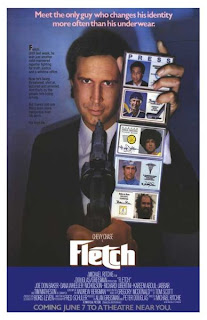 Fletch is a reporter working "under cower" as a bump on the beach in order to expose the drug business for his newest article. Accidentally, he meets a man called Alan Stanwyck who lures him into his mansion and proposes him a bizarre deal: he is supposedly suffering from cancer and will pay him a lot of money if he shoots him on Thursday so that his family will receive insurance. Suspicious, Fletch starts investigating: he disguises himself as a doctor and discovers Alan isn't sick at all. In the end, he finds out Alan works with Police Chief Karlin on the drug deal, so he has them arrested and flies off with Alan's girlfriend Gail.

"Fletch" is a cult crime comedy from the 80s that tries to impersonate the "Beverly Hills Cop" - it's crime elements are good and have style, yet the comedy addition seems very contrived. Chevy Chase is very good in his most trademark role of his career, yet his rough humor simply seems lousy and out of place. Some of the jokes, like when Fletch falls asleep in his bed in front of a basketball game on TV and all of a sudden dreams he is inside it taking the role of Kareem Abdul-Jabbar, have a certain bizarre charm, yet most of them seem to be taken from the typical mainstream comedy, exhausting themselves only with Chase disguising himself, doing cheap pranks or making sleazy comments about herpes or syphilis of a random man he just meet at a convention where he was about to be honored. In that aspect, this is a solid film that still has a few virtues, but isn't particularly funny.