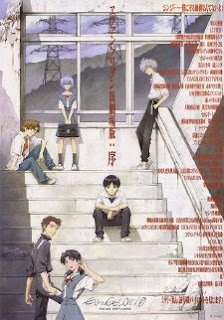 Tokyo-3, 2015. The shy and secluded 14-year old Shinji Ikari is summoned by NERV Major Misato Katsuragi to meet his evasive father Gendo and pilot giant robot called EVA in order to defend Earth from the invasion of Angels, bizarre creatures coming from space that could cause the end of the world. Shinji defeats the first Angel, Sachiel, but gets injured and meets the other pilot, Rei. Misato inhabits Shinji in her apartment. He then defeats Angel Shamshel and then Ramiel using a giant positron rifle that consumes the entire electrical output of Japan. Then Kaworu is awakened by SEELE.

The first out of new series of tetralogy films retelling the legendary anime series "Evangelion", "Evangelion: 1.0 You Are (Not) Alone" is a good film of bleak mood that doesn't manage to recapture the brilliance of the original. Did they keep some things from the series? They almost kept all of the scenes from the series! And that's where this film disappoints since it's 90 % identical with the first 6 episodes of the series. Almost everything, from the same camera angles, through the same situations and same gags, from the famous 'Hedgehog dilemma' up to the scene where Shinji storms out of the bathroom naked in front of Misato where only a beer can cowers his intimate part, are there. For people who are not familiar with the series, this could be interesting, but as a person who knows almost all of the scenes of the series in advance, the movie offers no surprises. Adding to it's difficult position is the fact that the first 6 episodes were the most straight forward action oriented, while all the good philosophical moments came from the second part of the show. A few new things were the sluggish CGI effects, some church music and the fact that all Angels bleed when killed. The episode where Shinji and Rei defeated Angel Ramiel, shaped like a giant Octahedron, was among the most spellbinding moments of the show, yet here it lacks that certain energy. It's a pity since the film is just a dry copy of a great original, yet it's unique final scene, a novelty for the series, promises that next time there may be more surprises awaiting.