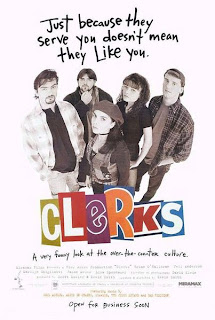 Dante Hicks (22) wakes up from a closet and answers a telephone call: his boss begs him to show up on Saturday on his job in a store because he promises that he will replace him by 12 o'clock. Dante accepts with disgust because he hates his customers, while the door of the store won't get open. One customer starts persuading all others to boycott cigarettes because they are toxic, but then gets exposed as a employee in a nicotine bubble gum factory. Dante argues with Veronica and often talks with Randal who works in a nearby video store. His boss doesn't show up at all so Dante leads the store until night, organizing a hockey game with friends, getting in trouble for selling cigarettes to a little girl. A customer dies in the toilette but Dante survives the day.

Back in 1994, the then unknown Kevin Smith shot his directorial debut, the black and white independent comedy "Clerks", for only 27.000 $, but it grossed over 3 million at the US box office, while he himself shows up with his friend Jason Mewes to play his trademark characters Jay and Silent Bob. "Clerks" are at moments clumsily directed film without visionary ideas, but they abound with contagious energy, showing once again that one only needs talent, and not huge amounts of money to make a good film. Brian O'Halloran and Jeff Anderson are funny when their characters Dante and Randal talk about the most unusual topics - from cheating in love ("How often did your girlfriend cheat on you?" - "8 and a half." - "...What do you mean 8 and a half?" - "Once she slept with me in the dark and thought I was Brad.") up to "The Return of the Jedi" ("The Jedi destroyed that 'Death Star' but didn't take into consideration the mass of innocent contract workers who worked there"). The movie is filled with adult motives and jokes, but it's humor has a lot of charm and seems real, while especially good is the scene in which a woman in a video store stubbornly always proves to Randal how she is always right, so he mocks her: "I hope your ego is now satisfied".