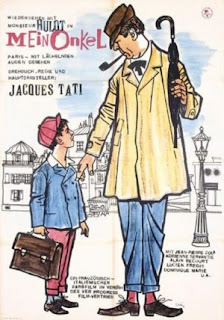 The Arpel family lives in a highly modern house. The father works in the "Plastac" factory and manufactures plastics, the mother cleans the house while their son Gerard attends elementary school and bores himself. Every time the neighbors show up, they turn on their water fountain shaped like a fish. One day the brother of the mother visits them, Mr. Hulot, who lives in the poor part of the town, but since he accidentally makes a mess and destroys the fountain, he leaves the yard and brings Gerard with him. Hulot gets fired in "Plastac" and leaves, while Gerard and dad become friends.

"My Uncle" is probably the most famous and best comedy directed by Jacques Tati, in which he once again stars in the role of Mr. Hulot, while the Academy awarded it with the Oscar for best foreign language film and the Cannes festival with the Jury Prize. Unlike his previous two films, Tati here still managed to set up a stable story and not just an unconnected queue of gags, even giving the film some sort of critique of the modern society, though rather unfocused (the Arpel family lives in a modern house while Mr. Hulot lives in a dirty suburb of town). Among the neat ideas is the one at the beginning where the titles of the crew are written on a board, not with subtitles, but the first 10 minutes are boring since the camera just loosely shows dogs, people on the street, cars. Only when Mr. Hulot shows up, again with his trademark pipe, does the story live up, offering numerous gags: a dog barks at a fish with teeth that peeks out of Hulot's bag; kids rock a car and hit the lid of a pot in order to make the driver think he made a crash; the father swings on the chair so Hulot stops and starts, observing that he doesn't see him cutting the wedge behind the wall; two heads show up on the two round windows making it seem the house has two eyes. But there is again the trouble of empty walk and forced nature, while the cold relationship between the boy and his oncle isn't even evoked since they practically don't even talk with each other.