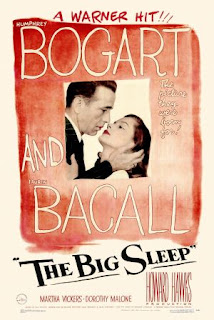 Private detective Philip Marlowe enters the mansion by General Sternwood who contacted him to help him solve a ransom aimed against him from some bookseller Geiger, while even his daughter's Carmen and Vivian are in debt. Soon Geiger is found dead with drunk Carmen who gets returned to the mansion by Marlowe. Owen, the family's driver, is also found dead in the car while some anonymous person begins blackmailing Carmen because he has her photo with Geiger before death. Marlowe discovers it's Brody, but he gets killed by some criminal. Geiger was the tenant of Mars, whom Carmen owes some money. Mars captures Marlowe, but he frees himself. Mars gets shoot by his own people when he opens the door.

"The Big Sleep" is considered to be a classic of crime and film noir genre whose agility is persistent even today, whereas the only big flaw that can be found in it is the messy and chaotic structure of the story that constantly brings new plot twists up to the rather vague and incomprehensible ending. That's probably because the novel of the same name, written by Raymond Chandler, was very daring, and the code of the film industry didn't allow too much "controversial" elements back then, which is why it is never explicitly mentioned in the film that Geiger loans pornography in his book store and then blackmails his customers, but just left to harmless vagueness and "hints" that can't get detected by most of the viewers.

When Howard Hawks placed his signature on the project, many didn't expect he would make such a skillful job, but the main star is the excellent Humphrey Bogart as the sneaky detective Marlowe: in the exposition, Carmen, the daughter of the General, throws herself into his arms just a few moments after she met him, and when the General asks him: "How would you like your whisky?" he replies with: "In a glass". The film is filled with tricky lines ("She tried to sit in my lap while I was standing up") but the most memorable moment might be when spies in the suspicious book store and disguises himself as a geek with a shrill voice, asking the shop assistant if she has the book "Ben Hur" 1860 edition with a duplicated line on page 160, which shows that Bogart actually had a very comic side to him. Some situations are bizarre, but that's precisely why they stand out today. In a way, the film elegantly follows Hawks' saying about what it takes to make a good film: "Three good scenes, no bad scenes".