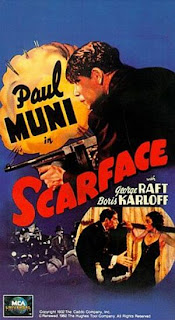 Chicago. Gangster Costillo gets shot after a party. The police quickly arrest notorious criminal Tony Camonte who really did assassinate him, but have to let him go due to habeas corpus. Tony works for gangster Johnny Lovo who now takes over Costillo's business of illegal beer smuggling in the south part of the city. But Tony slowly climbs up the crime hierarchy, seducing Lovo's girlfriend Poppy, killing gangster boss O'Hara in the north and then even getting rid of Lovo after he tried a failed assassination attempt. When Tony kills a friend because he slept with his sister Cesca, the police surround his hideout and kill him.

In "Scarface", one of his best films, director Howard Hawks proved he can be a real master of simple, but effective old school film making, impressing so much that even De Palma made a cult remake 50 years later. There are a lot of tough gangster films that graced the cinema, but this one really takes the cake - one just needs to take the virtuoso 4 minute opening take that goes from a janitor cleaning a club after a party up to the shadow of Tony who shoots mobster boss Costillo, and all other arguments are unnecessary. This is a real classic about the rise and fall of a gangster that nicely fills the rhythm, gives passionate little details and small touches here and there (Tony takes a match and lights it up on a Detective's badge) that all add up to a small masterpiece. Some have lamented that the films glamorizes gangsters, but that's hard to back up since it's clear that Tony's life is never sweet or care free, while a lot of scenes don't shy of violence (a running car just throws out the corpse of a gangster on the street in one scene), even though it's much tamer by today's standards. "Scarface" didn't win any Oscars, who infamously ignored Hawks' opus, but even today it seems undated and fresh, and that's a proof of a fine film.

I've been wanting to see this film for years, I caught the 'remake' a couple of months back and really didn't like it.

I'm a big fan of Hawks and from what I've heard, plus your review, this sounds like a real treat. Can't wait to see it.

The remake is actually very good, but this original is better. It's a surprisingly smart and intensive film.