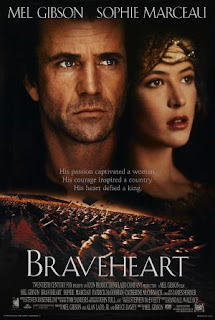 13th century. Edward I of England decides to occupy and annex the neighboring Scottland in a bloody way. The young Scottish lad William Wallace gets married to Murron, but the English soldiers try to rape her, and then kill her. Enraged, Wallace kills them in revenge and starts a rebellion against the occupation of his land. He starts his whole little Scottish army and even meets Princess Isabelle who admires his courage. He is captured and executed.

Adventure epic "Braveheart" became enormously popular and successful - for instance, it was screened in Scottland's cinemas for years, for obvious reasons - since director Mel Gibson and screenwriter Randall Wallace made a flawed, but very powerful and energetic biopic about the little known Scottland's freedom fighter William Wallace, equipped with a lot of emotions and pathos. The movie works best in the first half: despite a lethargic exposition, that half is excellent, abundant with unglamorous violence - the first battle of Wallace with the English occupiers stands out the most, in which he cuts off the leg of one evil soldier and smashes the head of the other one with a mace - but also with an occasional oddball moment in the too serious story, like when the Irish lad Stephen tells how he wants to "talk with someone equal to himself, so he talks with God".

The great battle between the English and Scottish soldiers is truly gripping, made with a lot of epic sense and power that hardly leaves anyone indifferent. The second half, though, is weaker: it has less battles and is thus more sluggish, the character played by Sophie Marceau, Princess Isabelle, is pale and, for a historic film, blatantly historically inaccurate (in reality, she was only 10 years old when Wallace was executed, thus she could not be the mother of his child, and on top of that there is no evidence she ever met him!), the English are just embarrassing black-and-white caricatures or bad guys, not real characters, while Gibson slightly narcissistically exalts himself in the role of a superhero. Some of his heavy handed mannerisms are really annoying - the story became too "Rambo-ized" and too obssessed with torture and violence at moments, something which would reach a breaking point in his later films - while he steals here and there from other epics, like the superior "Dances with Wolves". Still, for its sheer enthusiasm that does not stop at nothing, the movie has quality.