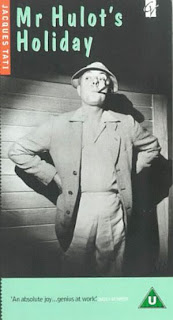 Mr. Hulot, always with a pipe in his mouth, travels for a summer holiday to Bretagne. He has to stop with his car in the middle of a road due to a dog that sleeps there. Hulot opens the hotel door and a strong wind blows away every newspaper of the guests. Everyone thinks he is a fool due to his clumsy nature: the boat falls in the sea while he was writing his name on it; a firework ignites while everyone sleeps; he listens to over loud music...Only the blond Martine has sympathy with him. At the end of the vacation, everyone gives Mr. Hulot their phone number before leaving.

Similarly as his previous film "The Big Day", Jacques Tati constructed his following comedy "Mr. Hulot's Holiday" as an ode to Chaplin and Keaton films, as a comedy without story but with a lot of gags, while he himself appears some 10 minutes into the film, for the first time using a pipe in his mouth as his trademark, acting almost without any dialogues. The screenplay was nominated for an Oscar but despite it's dynamics it has a lot of flaws. For instance, it's a pity that the characters are one dimensional while the plot is occasionally forced and overstretched. Still, many gags are funny precisely because of their simple nature: Hulot opens the door of the hotel and the wind blows away every newspaper of every guest, leaning even the beam of tea. A man holds a full glass, so when he turns his hand to look at his watch he accidentally spills the drink. Houlot's boat cracks in half while he is in it, while he even accidentally ignites the fireworks that hit at the hotel, making even one rocket explode in a room. It's a whole array of physical gags that inspired numerous comedians (Benny Hill, Sellers, Myers...) but without a deeper point.