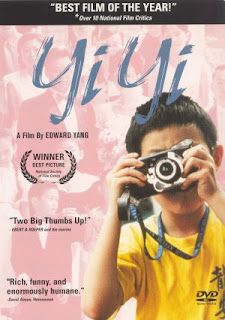 Taiwan. Xiao-Yan, deeply pregnant, marries her lover A-Di. His friend is a family man NJ who lives in an apartment with his wife Min-Min, 15-year old daughter Ting-Ting, 8-year old son Yang-Yang and grandmother. When grandmother falls into coma the doctors advise the family to speak with her in order to possibly wake her up faster. NJ has problems in his company that sells computers poorly so he tries to redirect the production for video games from Japan, but without success. On top of that, he gets visit from A-Rui, his big forgotten love from high school. A-Di is angry when Yun-Yun shows up at his party. Then he almost dies under the shower due to gas from the pipes. Grandmother wakes up from the coma but then dies, so a funeral is held.

Drama "Yi yi" lasts for almost 3 hours and is suppose to be excellent, since it was named by "Sight and Sound" as one of the ten greatest films of the past 25 years, but it isn't really - it assembles a mosaic of many characters but they, unfortunately, seem more passive and less active in the story revolving around family. Director Edward Yang loves the meditative style so his dramaturgy is gentle but also sometimes unimpressive and watered down. One of the best scenes is when NJ meets with his little son his old high school love in front of the elevator who gives him her phone number and leaves - but then suddenly returns and asks with determination why he left her on a date decades ago. There is also the humorous moment where a teacher blames the young Yang-Yang for having a condom in school, but realizes his mistake when he just finds an ordinary balloon in his pocket, so the kid later on hits him with a water balloon. It's an ambitious drama with a few uplifting moments (a manager with a pigeon on his shoulder) and a lot of seriousness, but not with enough energy to keep the concentration for the whole three hours of running time.