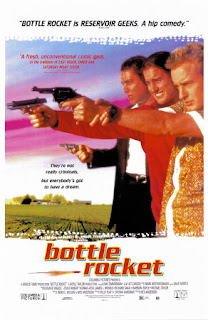 Anthony voluntarily spent sometime in a mental institution. In order to cheer up friend Dignan, he leaves from that place through the window using sheets. He then goes to visit his sister Grace in the elementary school and discovers she considers him a loser. Dignan, Anthony and Bob thus decide to become criminals so they rob a library. In their runaway through Texas they steal some fireworks equipment and settle down in a hotel. There Anthony falls in love with maid Inez from Paraguay but she refuses to go with him. For their former boss Henry, Dignan rounds up the crew in order to rob a building but can't open the safe. Dignan then lands in prison.

"Bottle Rocket" is a good directorial debut film from Wes Anderson, later the author of acclaimed films "Rushmore" and "The Royal Tenenbaums". Unlike those films, this one doesn't have such a clear and steady directorial hand, or the clever use of subtitles, lacking that special touch, but on the other hand it has a lot of Anderon's later often used trademarks, like the actor Kumar Pallana, one character seen under water or the end shot in slow motion. It has a few neat gags revolving around the clumsy wannabe "criminals", like when Dignan presents Anthony his 75-year plan about their lives after the robbery, or some quirky dialogues, like: "Then she asked me if I like surfing...Then I knew not only that I don't want to answer that question, but that I don't want to see her again" or "Bob ran away. He stole his car". Still, despite a few occasionally well directed moments, the story is anecdotal, tiresome and overstretched.