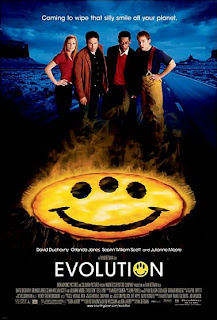 A mysterious asteroid crashed in the Arizona desert, where the young Wayne was practicing for a fireman exam. Ira, professor of chemistry, and Harry, professor of geology, go to the site of the crater and take some samples of the asteroid. In the laboratory, they discover that the rock is inhabited by unicellular organisms with 10 DNA bases which causes their extremely fast evolution. In 18 hours worms already evolved in the crater, which caused the appearance of army and Dr. Reed, while Ira and Harry get expelled. Still, they disguise as soldiers and enter the crater to investigate it, where lizards already developed. But the creatures are expanding uncontrollably while the fire transforms them into a giant, slimy mass, so Ira, Harry and Reed destroy them with Selenium in a shampoo.

Making a comedy out of evolution is definitely an idea with potential. But the authors of "Evolution" obviously didn't use almost any of the possibilities, instead filling the story with irrelevant events. The first 30 minutes are rather sympathetic: in the Arizona desert, fireman trainee Wayne sets a house on fire in order to practice saving puppets for his fireman exam, which is the kind of humor that has some charm. But the movie quickly dissolves into nothing due to irritatingly stupid creatures - like a lizard from whose mouth a new head pops out and bites the arm of a woman; a tree that eats a caterpillar; a dragon that throws up slime from which a new dragon evolves; slimy mass that farts etc. But that doesn't have anything to do with evolution - it's just cheap nonsense. One of the rare scenes that exploit that process is the one where Ira is amazed how worms can evolve out of unicellular organisms just in 18 hours, while Harry tells him: "They are living the American dream". Except for the charming David Duchovny and a small cameo appearance by Dan Aykroyd as a Governor, the whole film is wasted on nonsense and it's a pity there weren't more original gags - one just needs to remember the "Simpson" episode "Marge vs. the Monorail" where a mutated squirrel adapted herself to her environment so much that she shoots laser beams from her eyes in order to get nuts from a tree - now that's inventive.