Guess Who's Coming to Dinner 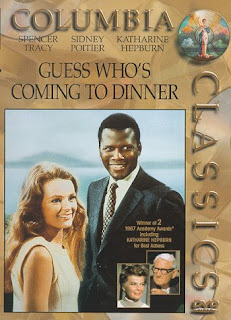 San Francisco. The middle-aged, upper class and seemingly open minded couple Matt and Christine are very surprised when their 23-year old daughter Joanna announces that she is planning to get married for Dr. John Prentice - an African American. Christine is at first a little bit confused, but she accepts the situation very quickly, while Matt is contemplating if he should give them his blessings or not. During a fancy dinner, John's parents show up who also doubt if a marriage between an white woman and a black man can work. Although not entirely happy with the situation, Matt still decides to give them his blessings and accepts John as a new member of his family.

Humorous drama "Guess Who's Coming to Dinner" is less known for outstanding quality as for two inside facts - it was the first Hollywood film featuring a then "controversial" relationship between a white woman and a black man, and the last film in which the famous actor Spencer Tracy appeared - but as a whole it's still executed eloquent and unpretentious. The Oscar for best screenplay is justified (although some complained that the story ended right there where she should have just started) but the one for Katharine Hepburn for best actress was awarded only semi-justified, without a really good reason, since that year Anne Bancroft delivered a better performance in the brilliant classic "The Graduate". It's an interesting fable about false prejudice/moral and real values - interestingly enough, Sydney Poitier's intelligent character is presented as a prefect son in law, making the only excuse for the parents not to like him his skin color - enfolded in a social commentary about why some boundaries are made, a good, but "safe" and standard achievement, with some biting dialogues (John replies to his father, who wants to stop the marriage, that he doesn't owe him anything because "it's a duty for every parent to take care for the children he got"; Matt says to the "colorful" couple what he thinks: "you're wrong, you're as wrong as you can be. I admit that I hadn't considered it, hadn't even thought about it, but I know exactly how he feels about her" but also adds "As for you two and the problems you're going to have, they seem almost unimaginable, but you'll have no problem with me"), and the rhythm and the mood are nicely done.