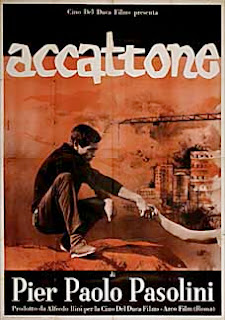 Rome. Vittorio Accattone never worked in his entire life. He is a pimp, and all the money is earned from his prostitute Maddalena. The only thing he ever does is partying with his fellow colleagues. But one day Maddalena gets beaten up from Accattone's rivals so she decides to report to the police and quit her job. Accattone is suddenly left without an income so he decides to beg for some money from his former wife, but she refuses. When he meets a blond girl, Stella, he starts flirting with her, planning to employ her as his new prostitute. But then he really falls in love with her and abandons the idea. In order to support her, for the first time in his life he gets a job, but quits because he can't handle the pressure. In the end he becomes a thief and dies in an accident.

With his directorial debut in form of loose Italian Neorealism and based on his own novel, Pier Paolo Pasolini already in the start created a commotion and surprised because he chose a pimp for his main hero, but "Accattone" is still an excellent achievement that was made in the spirit of De Sica, Fellini and Rossellini and marked the later iconography of the author. That's mostly refers to the "loose" acting of unprofessional actors, some deliberately improvised (Accattone's colleague is so hungry he bites a flower) or artificial parts, and religious symbolism that's mixing profane and sacral in the title hero who goes through a transformation from a bad guy into a honest martyr (he never worked in his entire life, but in order to prevent that his new girlfriend doesn't become a prostitute he finds a job for the first time in his life). The composition of the story and the characters (Stella can't resist not to stare at two prostitutes on the street) is better than Pasolini's similar film "Mamma Roma", while the controversy back in those times today seems subversive and honest.