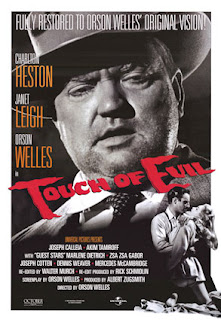 An unknown man plants a bomb inside a car in a Mexican city near the US border. The contractor Linnekar and his girlfriend enter the car and drive away to the USA, but are then killed by the explosion of the bomb. One of the witnesses is Mike Vargas, a Mexican narcotics official, and his wife Susie. Soon the cynical sheriff Hank Quinlan starts investigating on both sides of the border, arresting an innocent looking Mexican who was having a relationship with Linnekar's daughter. Vargas suspects Hank planted false evidence and accuses him of playing dirty. Hank on the other hand gets his wife in a framed delict, arresting her for dealing with drugs. Vargas, with the help of deputy Pete, records Hank's incriminating dialogues. In the shoot out, Hank and Pete get killed.

"Touch of Evil" is the second best directorial achievement Orson Welles ever did, right after his famous and critically acclaimed "Citizen Kane", the last "official" film noir filled with dark images, strong atmosphere and fabulous cinematography, so sharp and intense that it does not even seem as if it was made in the "tame" 50's. Unlike some other bleak films, the darkness in this masterpiece almost seems magical, like black poetry, and even Charlton Heston's wooden acting ended up looking realistic. The first intriguing element in the film is already his bravura, 4-minute long opening shot filmed in one take: at night, somewhere at US-Mexican border, on the Mexican side, an unknown man places a bomb in a car of a contractor, which then exploded on the American side, killing him and his girlfriend. It's obvious Welles put a lot of effort into that scene, and it shows, since it influenced a lot of other (ambitious) directors. Also, the story is full of juicy dialogues: right after the first scene, the police debate if the authorities from US or from Mexico should handle the incident, and then the cynical sheriff Hank shows up on the scene of the crime. The naive Vargas says: "I'd like to meet him", but some guy replies to him: "That's what you think!". A lot of scenes seem grotesque to the extreme and the unusual camera angles emphasize the phantasmagorical feel of the film even more, and towards the end the story transforms into a study about the abuse of law and corruption among the police, becoming a little bit inert, which is it's biggest flaw. Almost every role is meticulously placed, from Welles' big detective Hank up to the brothel owner Tana, who is played by charismatic Marlene Dietrich who sadly has barely one minute of screen time. "Touch of Evil" is a movie so fixated with its style that it is not for everyone's taste, but a touch of talent can be felt in it during the whole time.