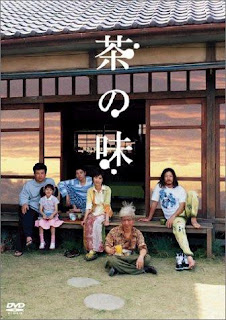 The Haruno family is a very unusual family, living in the countryside. The son, Hajime, has fallen in love with a girl in his school and wants to impress her by playing the game Go. The mother is drawing an animated film and uses grandpa as a model. The daughter, Sachiko, is being followed by a 20 foot tall duplicate of herself only she can see. The father, Nobuo, is a hypnotherapist who occasionally hypnotizes his family. The uncle, Ayano, is telling bizarre stories and is otherwise a record producer. The whole family occasionally comes together to drink tea.

Katsuhito Ishii's "Taste of Tea" is a bizarre mess with taste, a slow, simple family film that owes a lot to Ozu and Tarkovsky, but doesn't find new ways to enrich it's value. It's a film without a story, composed of little vignettes from everyday life, the characters all have their charm (for instance, in an early, hilarious scene, grandpa enjoys opening the window to observe his granddaughter in front of the house - but whenever she turns her head towards him, he instantly closes the window, and opens him as soon as she turns her head back - and repeats the procedure for almost a dozen time!) and the static composition of the film connects with the Eastern tranquility, seeming ambitious. Yet, it's still an overlong film with it's 140 minutes that drag, and rather colorless, lifeless and monotone despite it's quirky elements. Sometimes bizarreness can give the film a special spark, but here it only seems out of place - for instance, the uncle explains how he defecated in the forest on a big white egg, digged deep into earth. But later on it is revealed that his feces actually cowered the top of a skull of a dead man, who was assassinated by the mob and put into ground. Even more bizarre is the dream like scene where a giant sunflower grows so big he cowers the whole Solar system. Still, some of the scenes hit the right note, and when they do, they really feel right on, like the one where the crew watched their 2 minute animated film and added sound, while the director (played by the famous Hideaki Anno) gave flowers to the mother, the animator. "Taste of Tea" is a disconnected film, a dead rock that doesn't move, but seems nice to look at.