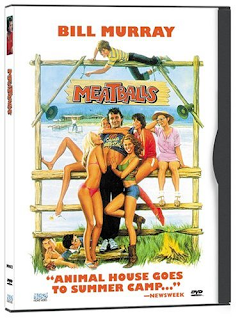 Tripper is the good spirit of "North Star" camp in the middle of the forest. His job is to watch out for the kids who spend their summer holidays there. But although a radio moderator and a good friend of chief of security of the camp - whom he calls "Mickey Mouse" - Tripper is too hip for his profession. Every kid in the camp, among them Fink and Spaz, are angry or grumpy for having to go to the camp, but some of them use that opportunity to meet new girls. One lonely kid, Rudy, becomes friends with Tripper, who motivates him to jog for victory in a match against the other camp Mohawk.

"Meatballs" is an amusing light comedy without too many vulgarity that manages to look much politer than "Caddyshack", although the script for both films was written by Harold Ramis. Actually, "Meatballs" has only one true virtue; Bill Murray's brilliant comic presence. Like most of light comedies, this movie is also trying to please the audience's cheap need for mischief in a cheap way - although some of the jokes seem pretty funny, like carrying the camp director out in his bed in the middle of the night and leaving him on the side of a road - instead of offering some clever humor and insight into teenager's lives - who knows what this story could have been had it been directed by some comedy master like Wilder. The film is rather dated, but in a strange way it seems more charmingly dated than some other similar films made today that are annoying and disgusting without limits; from the apprehensive opening shot of Murray's character Tripper waking up in his bed, up to the cute nostalgic feel and a few hilarious jokes (Tripper is telling the kids a scary story about a murderer with a hook, an then reveals his hand - with a hook!), "Meatballs" is a fresher sufficient comedy than other sufficient comedies.