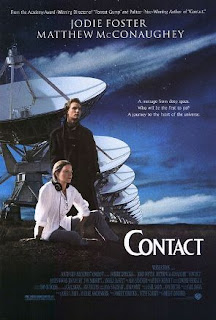 Scientist Ellie Arroway is strongly convinced that aliens exist, because, as she said herself: "If we are alone in the Universe, then it's a huge waste of space". After her father dies, she starts working at the SETI program at an Observatory. One day, they are surprised when they get a signal from the star Vega, which contains the first TV signal that left Earth, the '36 Olympics in Berlin - but also cryptic signals about how to build a space travel machine. The whole World's reaction is mixed regarding the whole issue. Ellie is chosen to be the pilot in the vehicle that travels through a wormhole - but there she only sees the projection of her father, a human form of the alien who tells her that this is only the first step of human contact with extraterrestrial life. When she returns, it turns out that she was only missing for 2 seconds.

Robert Zemeckis' first film after his most famous achievement, "Forrest Gump", wasn't so directed towards emotions and hypnotic awe which is why it earned far less and gained less critical acclaim than the above mentioned film. But "Contact", an adaptation of the novel with the same title by Carl Sagan, is a very thought provoking film that is so interesting because it never for a second shows how the aliens may look like, but instead just depicts how people around the World would react upon discovering that they are not alone in the Universe. The film starts out with a brilliant opening shot of the movie camera in space traveling away from Earth, while the further it goes to the edges of our Solar system, the older the music that can be heard in the background, since it shows how much time it takes for Earth's signals to reach to Pluto and beyond. The screenplay crafted an real odditorium of events on Earth, from the Larry King show up Tom Skerritt's character meeting Bill Clinton (president of the US at that time), yet the whole thing is done with measure. The special effects are quiet and subtle, mostly used only towards the end when Jodie Foster's character takes a journey in the alien designed vehicle, when the film, just like so many science-fiction films, again seems to share-borrow some things from Kubrick's "Odyssey". A long, but brave, philosophical achievement.