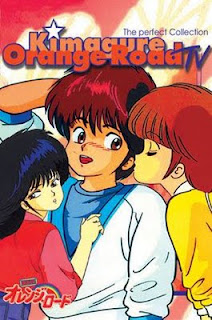 Teenager Kyosuke Kasuga moved with his family 7 times already because he and his sisters Kurumi and Manami posses “the power”, i.e. telekinetic abilities. Their father, a photographer, is on the other hand “normal”. In school, Kyosuke falls in love with the rebellious Ayukawa Madoka, but decides to lead a spare relationship with another girl who already fell in love with him, Hikaru, since he doesn’t want to break her heart. Ayukawa finds a part time job as a waitress in ABCB café while Kyosuke goes through numerous adventures with her. In the end, Kyosuke and Ayukawa kiss.

Sometimes the viewers are waiting for years and years for a new story to be filmed that would encompass a theme precisely they want and that would look as if it was made just for them. But they don’t know that often such a story was already made in the past, except that they don’t know about it. Yet, even though it’s from the past, when you look at it for the first time, it seems new. “ Kimagure Orange Road” is an anime Coelacanth, a forgotten jewel that almost nobody knows of, but a one which can be found in the long list of past ‘archeological’ anime. The animation is rather dated and some will find the hero’s flip-flop between two girls contrived, but in any other way the story would quickly end and wouldn’t develop the way it does, turning into a quiet delight. In one amusing episode at the beginning, Kyosuke wants to use his “power” to score during a basketball game so that he could impress Ayukawa, but then decides it wouldn’t “be honest” and thus plays normally, eventually losing in the game. Later, while sitting alone in the stadium, he thinks about his dilemma and nonchalantly uses his “power” to throw the ball across the whole stadium into the net – not knowing Hikaru accidentally saw him and fell in love when she saw that move, leaving it only to the viewer to realize and comprehend the irony of chance.
The story has wit: when Kyosuke forgets about his first date with Hikaru and comes too late to the place they were suppose to meet, he finds that she wrote her anger on the bulletin board, stating: “Kyosuke is a jerk!” Every time an author incorporates fantasy elements into a fairly straight looking story, he/she better have a good point for it, not to make it look as if it was there without any reason. Here, though, that concept – Kyosuke having telekinetic abilities – was exploited nicely when he, occasionally, wants the mill to “run his way” for a change: when Hikaru wants to take him to the ABCB café, he immediately wants to stop it because of fear that Ayukawa, who works there, will regard them as a couple. Alas, he uses the “power” to jam the door so that Hikaru won’t be able to open it and they would stay there, whereas when they eventually do get out he uses his ability again humorously to keep stalling it – to make the train crossing signal turned on as long as possible, even though that causes a giant traffic jam.
In one hilarious scene, he even accidentally teleports himself naked in a car in front of a love couple. One of the sweetest romantic moments, though, comes so swiftly and light that it has universal appeal, both for fantasy and drama fans, in the episode where Ayukawa gave the main hero instructions and then secretly inserted possible test questions in the menu when he came to the ABCB café, which shows unprecedented care. Unfortunately, the show lost its way from episode 30 onwards since the authors started to trip too much over their own feet with far too many unnecessary time travelling/body switching episodes. Instead of being a romance, as it was at the start, the show eventually became just a collection of insane stories, some of which were offensively stupid. And yet if one would have to circle out those rare examples of masterwork writing, then it can still be found here, in episodes 22 and 28, which are perfect. The series ends with a bang, a very unusual end that made as much right as much as it did wrong. Unassuming and clumsy, with sweet 80s flair and fantastic music, “Orange Road” reminds a lot of “Maison Ikkoku”, and even though it doesn’t reach the latter’s heights since it’s too mild and hits too many false notes, it is still a small romance classic. Even “Maison” made mistakes, but when it did, its mistakes still seemed so much better than the mistakes “Orange Road” did.
Grade:++
Posted by Marin Mandir at 12:26 PM