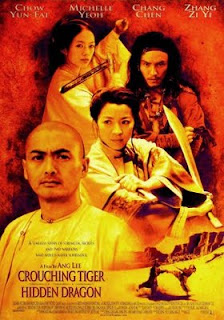 China during Qing Dynasty. Shu Lien brings an antique sword to Beijing. She is a very good fighter, secretly in love with colleague Bai. When the governor's daughter, Jen, shows up and steals the precious sword, commotion breaks out: her evil teacher Fox kills a police officer, Jen doesn't want to get married to a friend of her parents since he fell in love with a burglar she met in the desert. Jen runs away and starts a fight in a bar, but gets found by Bai. He arrives at a cave where he finds and kills Fox, but not before she poisons him. Bai admits Shu Lien before his death that he loves her, whereas Jen comes too late with an antidote. Legends says a wish will be granted to the one who jumps from a bridge: Jen jumps and flies oof in the distance.

"Crouching Tiger, Hidden Dragon" is an ode to classic Chinese Wuxia (martial art) films, but it also has a psychological depth which gives it a certain advantage compared to the more simple action examples of that genre. For the huge amount of prizes - among others it won 4 Oscars, 4 BAFTA awards and 2 Golden Globes - the biggest merit goes to the feeling for exaggeration with sense in the 6 epic battle sequences: a virtuoso romantic action, where people slide in the air and jump over houses while the camera is always there to catch it on film. Ang Lee directs the film like an awakened dream, sometimes too unglamourous, yet with a very fine sense for rhythm, whereas Yuen Wo-Ping ("Matrix", "Charlie's Angels") was responsible for the wonderful choreography of the battle sequences. Still, these kind of films were seen regularly in China for decades before "Crouching Tiger", which is the reason why it wasn't at first depicted as something special in its homeland, whereas it's not quite clear who is suppose to be the main character in the plot, since it all starts with Michelle Yeoh, but then the charming Zhang Ziyi shows up and steals the show, remaining longer and longer in the story, until it ends with her. Yet, for all those magical "impossible" stunts, at least a small spark of charm in the film is hard to deny.