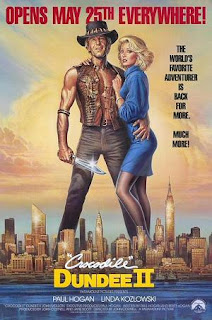 Coming to New York with his friend Sue, adventurer Mick "Crocodile" Dundee is bored. He is fishing in the sea, but mostly cannot escape the routine urban life. However, he gets a letter from a reporter who was killed by a drug mafia, in which photos of the organization are attached. In order to get them, the mafia kidnaps Sue. Dundee saves her, but in order to beat the mobsters, he lures them to Australia, where he challenges and captures them one by one.

After the huge success of the film "Crocodile Dundee", a sequel was made, which at times manages to touch the original, while it was almost equally commercial as the first film. Comedian Paul Hogan and his wife Linda Kozlowski are again sympathetic and playful as the main protagonists, while the only pity is that the director was replaced. John Cornell, it seems, cannot keep the film interesting, while the inclusion of the deadly serious drug mafia lead to the fact that the film loses it epithet of a harmless comedy. The whole story seems as if it was made for a completely different audience than the one that adored the first film where there were no bad guys and no plot, while here the story became a clumsy action flick. Even though its illogical and cliche ridden, the finale where Dundee defeats the mobsters one after one in his homeland, his terrain, the Australia, is such a sweet 'guilty pleasure' that it's definitely the highlight that should be seen.