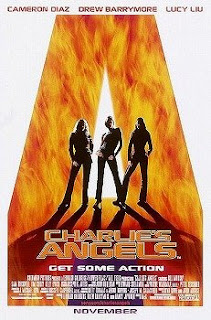 In an airplane, an African American prevents a man from planting a bomb, catapults them both out and they use a parachute to land on a powerboat. The savior takes his mask off - and turns out to be a woman, Natalie, who is a part of a female trio of secret agents. All of them - Natalie, Alex and Dylan - were at first without an orientation, until the mysterious Charlie turned them into agents who get orders through his assistant Bosley. When some Vivian gives them the assignment to find a microchip than can imitate any voice, the trio falls into her trap and many twists, since her and Knox's plan is to find and kill Charlie. Still, the Angels stop their plot and end on the beach.

"Charlie's Angels" managed to demolish the prejudice that old TV shows can't be revitalized into a modern and amusing product with ease. Some critics weren't especially overwhelmed by it, but this is a simple case of a fun film. The emancipated heroines are cheerful and fresh, have also personal lives, are energetically played by Diaz, Barrymore, Liu and at any rate are much more fun than the stiff James Bond who stopped being convincing after 10 sequels. Such an independent femininity reminds of heroines from the best examples of Japanese animation. Even though the story is embarrassingly written at some moments and one shouldn't demand too much from it, one also shouldn't forget that this a comedy which spoofs the spy genre and has life. Bill Murray is excellent as Bosley (even though some random scenes were bellow his dignity, though they were minor), as well as Matt LeBlanc and Sam Rockwell. The debut director McG showed impressed the most with a very good visual style and virtuoso directed action sequences, full of charm, which is why this is simply structured as a youthful fun, which isn't a sin at all.