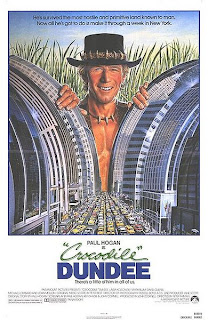 New York reporter Sue Charlton goes to Australia to write an article on adventurer Mick "Crocodile" Dundee who apparently lost his leg to a crocodile. But once there, she discovers the rumors were exaggerated since he only has a small scar. He copes perfectly in the jungle and sometimes even saves endangered animals (except for crocodiles). Sue brings the sympathetic adventurer to New York where he has a hard time adapting to the urban life. When editor Richard proposes Sue, Dundee leaves. But she stops him in the subway and admits she loves him.

Australian comedian Paul Hogan didn't appear in many films, but he remained unforgettable as the relaxed adventurer Crocodile Dundee in this cult hit for which he won the Golden Globe and was nominated for a BAFTA as best actor, since at his core he plays a swab hero. The film had a modest, 8 million $ budget, but it soon turned out to be a real gold mine when it went on to become the 2nd most commercial film in the US of the year. There where the cliches start in adventure films, like "Romancing the Stone", there "Dundee" skilfully avoids them or spoofs them, whereas in doing so it never seems pompous. For a film without a plot, it's unbelievably successful, whereas it contains a whole queue of brilliant ideas and events, not only funny, but also wise - where the hero even defends animals.

A swab but analytical approach, and at times a fantastic fun. Basically, the film is a neat yin and yang story where New York reporter Sue is in a "fish out of water" plot in Australia, and then the tables are switched when Australian Dundee is in a "fish out of water" plot in New York, but his wild, free and unfettered spirit is completed by her sustained and civilized manners, and vice versa. Today, the film seems too arbitrary and not that fun anymore, while some of Dundee's 'rough' misadventures in New York are somewhat embarrassing (like when he touches a cross-dressed man between the legs to see if he is a woman or not), yet some of his jokes (like when he is smoking and, having nothing, uses his own hat on his head as an ashtray or when he says "Good day! Good day! Good Day!" to hundreds of New Yorkers on the street) still have charm, while it also has a great romantic ending in the subway: it is a wonderful contrast of the overpopulated USA and the underpopulated Australia, symbolized in the image of Dundee surrounded by hundreds of people waiting for the train, a clash of civilizations of sort, but also contemplates how his small, but unique spirit manages to surpass them in a very visual moment.