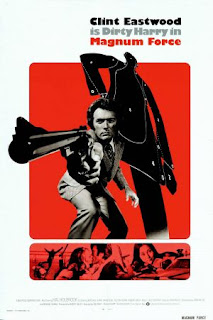 Due to his openly cynical persona, Inspector Harry Callahan got the order not to interfere into specific cases without permission. He gets a new partner, African American Early, and then disguises himself into a pilot to enter a kidnapped plane and shoot the hijackers. But a wave of violence is rocking the city: an angry cop shoots people who are accused for crimes but were set free by the court. Harry suspects his colleague Charlie, but when he also gets killed he realizes that the perpetrators are Davis and the Police Chief. When a bomb kills Early, Harry shoots Davis and the Police Chief.

The second part of the famous "Dirty Harry" movie series, "Magnum Force" was written by John Milius and Michael Cimino, but obviously without much effort. Besides a sloppy cohesive structure of the story, the most bizarre thing is that Harry is in this film fighting precisely against those people who acted like him in the first film: namely, against cops who, on their own, kill criminals which were released by the court. "Obviously, someone intends to make the courts unemployed", says one police officer. Despite a few odd moves (disguising as a pilot in order to enter a hijacked plane; a deliberate crash of a motorcycle with a car), it seems as if the character of Harry Callahan changed into a "soft" guy and too clean good guy, without any grey areas in between. It's nothing bad that he sticks to the rules, but somehow it seems that they lost the honest nihilistic cynicism which adorned the shrill original.

"...the most bizarre thing is that Harry is in this film fighting precisely against those people who acted like him in the first film: namely, against cops who, on their own, kill criminals which were released by the court."

That isn't odd. The entire point of the movie was to make Harry confront that which he, himself, was in danger of becoming. Harry never went hunting down people to kill. He just didn't show a lot of reluctance to shoot them if they were a present threat. Harry, in the original film, is sort of a fascist fantasy. He does what he does to protect the public, without regard for those pesky civil liberties that, the first film told us, only protect the bad guys.

The first film faced a lot of criticism for that, which is why we got MAGNUM FORCE. It deals with the very dangerous places that sort of thinking leads. A self-appointed murder squad, operating inside officialdom but entirely outside the law. Harry is, at heart, basically a good man; when he sees himself reflected in the actions of those cops, and it gives him pause. As he says in the film's key line, "a man has got to know his limitations."

I like MAGNUM FORCE a lot. It isn't nearly as good as the original film, but it's an indispensable companion to it.

You got a great point there. I never thought about it that way. This way, the 2nd film "corrects" Harry's more 'hard line' approaches.