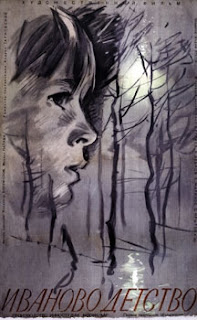 World War II, Soviet Union. 12-year old Ivan crosses a river and arrives at a Russian military outpost where he asks Lieutenant Galtsev to phone the Headquarters. Surprised, Galtsev is ordered by Colonel Gryaznov to give Ivan paper and pencil and treat him well. Namely, his family was killed by the Nazi soldiers and he joined the partisans under Gryaznov. At the same time, a Captain is flirting with army nurse Masha. In a raid, Ivan disappears in a swamp. Years later, in Berlin, Galtsev finds documentation which states that Ivan was executed.

Andrei Tarkovsky's feature length debut film is an excellent anti-war film that presents World War II untypically as an intimate experience and not as an action spectacle, proving to be rare and valuable since the famous Russian director crafted only 8 feature length films in his entire 24 year career. Even though the non-linear story is sometimes too hermetic, Tarkovsky managed to create a very clear message about a child who lost his family in the war, indulging in emotionally sustained setting that gets less direct emotions on screen and much more shows an objective situation of the events. The thing that stands out the most is again Tarkovsky's 'tour-de-force' visual style: from the dreamy opening where Ivan is "floating" above a meadow and giggling while touching the branches of trees up to the long forest scene where a Captain is holding army nurse Masha in his arms above a rift (while the camera is under them) and then she climbs up and he follows her, getting exactly in a position where the camera is capturing her in the extreme foreground and him in the background, the whole film has a masterful shot composition, creating hypnotic images that are so much more engaging here than in his later films ("Solaris", "Stalker") which, to be honest, just lazily consisted out of lax long takes. This is a reason why even the hard to comprehend finale seems adequate, since the whole leitmotiv of the film is escapism from the harsh reality in favor of some better world of imagination and creativity.