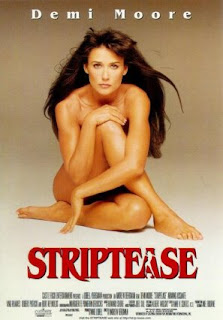 FBI secretary Erin gets fired while the custody for her daughter Angela is given to her disgusting ex husband. In order to pay for the appeal, Erin gets a job in a striptease bar where she is protected by bouncer Shad. When customer Jerry spots the respectable politician David in the bar, he gets killed in order to keep the embarrassing scandal a secret. Then police officer Garcia is brought to the case and begs Erin to help him solve the case. Besides that, she kidnaps her daughter in order to be with her. When she makes a private dance for David on his yacht, Garcia arrests him together with his associates.

"Striptease" is rather colloid in mixing the genres of drama, comedy, crime and erotic, especially since it's not fun at all. The screenplay is so half-heartedly written and rushed that only hard core fans of the actors will consider the lax punchlines successful. Among the better jokes is a python of the stripper called Monty Python or when politician David (Burt Reynolds in a quite embarrassing role) speaks with his associate ("My brain is just a mash!" - "That's why you are the Congressman!"). The only virtue that some viewers will enjoy is the attractive body of Demi Moore (who got a record 12 million $ salary even though the movie was a flop at the box office) who shows a lot of skin - bare breasts and rear in a few scenes. Her performances in the striptease bar surprisingly contain a lot of aesthetic, which is why she will remind of some strong female fatale characters from various film noirs. But they were interesting even when they were dressed.