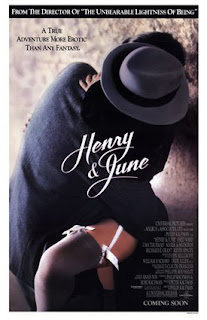 Paris, 1 9 3 0s. Anaïs Nin is a young woman who is having a "clean", but rather boring relationship with her husband Hugo. One day, she meets the aspiring and wild artist Henry Miller who instantly fascinates her with his free love life, even though he is married to June. As Henry writes his book "Tropic of Cancer", Anais falls for him, and then also for his wife June, discovering her lesbian side. Still, she eventually gets tired of both of them and their excessive lives. As she leaves in Hugo's car, Henry is driving a bicycle behind them.

Anais' (fantastic Maria de Medeiros, a very underrated actress) relationship to Henry Miller is full of contrasts: since she is timid and conservative, she is somehow strangely fascinated by his wild love life which causes a shift in her character and liberates her, yet she somehow gets in the end quickly tired of it. There is a scene that perfectly sums up her feeling: Henry begs some stranger on the street to give him some money and she cannot watch him sink so low, so she intervenes, says: "I'll give you some money!", and does in an almost motherly caring way. He is thankful, but immediately just enters a building which turns up to be a brothel and goes upstairs with two naked girls. Anais sees this and is annoyed, yet cannot bring herself to hate him. The reoccurring theme of the film, revolving around the courage to live life freely without limitations, is neatly incorporated into the story full of erotic sequences, but done with taste and intelligence: not good enough to be great, but too good to be forgotten, "Henry & June" is a dreamy film that works on a subconscious level and burns slowly, whereas Fred Ward and Medeiros are phenomenal in their roles, naturally portraying two people on a same wave length. Precisely because of the authentic feel, the film seems interesting even at boring moments.